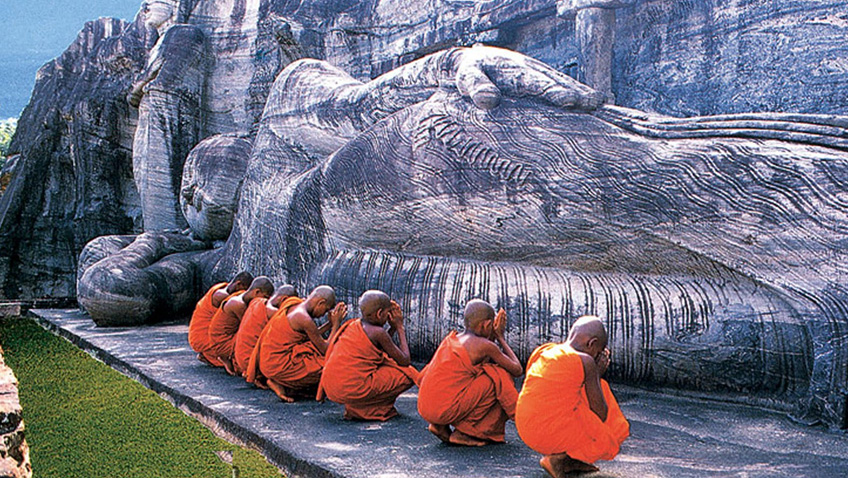 Nestled in between the ancient cities of Anuradhapura, Polannaruwa, Dambulla and Kandy is a wealth of history, a cherished collection of monuments and monasteries, palaces and ponds, sculptures and paintings; a testament to the ancient civilisation that wrought their domain with such ingenuity. These memorials are of immense value to Sri Lanka as well as the world, being of both a cultural and religious nature. Indeed, the triangle holds five world heritage sites within its imagined boundaries. An entire holiday can be planned around examining and relishing these vestiges of the past, and there are certainly some sights that aren’t to be missed.

Anuradhapura is called the cradle of Sri Lankan civilisation, it was the first kingdom of the country and it was the capital of Lanka for over a century. The most impressive thing to see in Anuradhapura is the Jethavanaramaya, a stupa of epic proportions, brick red and sprawling across more than 5 hectares. It reaches up 400 feet into the sky and was the third tallest structure of the ancient world. Abhayagiri is not quite as massive but is still very imposing, and the ruins of the monastery shrouded in forest are haunting. Watch out for a beautiful, intricate Moonstone at the bottom of the stairs as well. Ruwanweliseya is stark white, abounding in history. The Sri Maha Bodhi is the oldest living tree, grafted from the sacred Bo tree under which Buddha gained enlightenment. The tree is surrounded by a golden fence and one can experience the living religion of Buddhism as people throng to the tree and pray aloud. Nearby is the Brazen Palace, a two storey building that had a bronze roof and housed kings and queens. The Isurumuniya Temple is a rewarding site, as it includes a lovely pond with adorable elephant reliefs nearby, a climb up rocks that lead to a spectacular view and a small museum with sculptures including the famous Isurumuniya Lovers. Kuttam Pokuna or Twin Ponds is another lovely sight. These large baths were for the priests who lived in the monasteries nearby. The pools have elaborate designs running down the stairs and the sides.

Polannaruwa is similar to Anuradhapura, though smaller in size and thus more compact. The Alahana Pirivena, a massive complex, is a fantastic site to visit, featuring ruins of buildings and many statues. The Lankatilaka and Tivanka image houses are largely intact and hold antique paintings and sculptures. The Parakrama Samudraya of course must not be missed, built by the King Parakramabahu who sagely advised that not one drop of water should run to the sea without being used by man.

Sigiriya falls into the triangle as well, and the castle atop the large rock is perhaps the most fascinating and captivating historical site in Sri Lanka. With an epic backstory setting the ruin amidst royal betrayal and civil war, the beautiful gardens below and the stunning citadel in the sky are enthralling.

Kandy holds the extremely important Temple of the Tooth Relic, an artefact that lent great credence in deciding who had the right to kingship.

Dambulla has a cavern of magnificence, a pleasant climb up a rock that ends in a cave of dozens of golden Buddha statues. These are of great religious and aesthetic value.

Other sites within the triangle include Yapahuwa, a lesser known capital, as well as the massive Aukana statue of Buddha that stands at about 40 feet. The relics of Ritigala are melancholy, with unrestrained forest creeping over ancient stone. The nature parks at Minneriya and Kaudalla are also remarkable and well worth a visit.

Trinkets are usually available near the sites, ranging from the ornamental to the religious to the useful. A tip for photographers; do not take pictures of statues with your back facing them. Fruits and refreshing coconut water is available on the roadside, should you wish to freshen up. There are countless hotels that are stationed within the triangle, and many tours that are available. Whichever way you wish to do it, you will be rewarded by an adventurous romp through Sri Lanka’s cultural triangle.