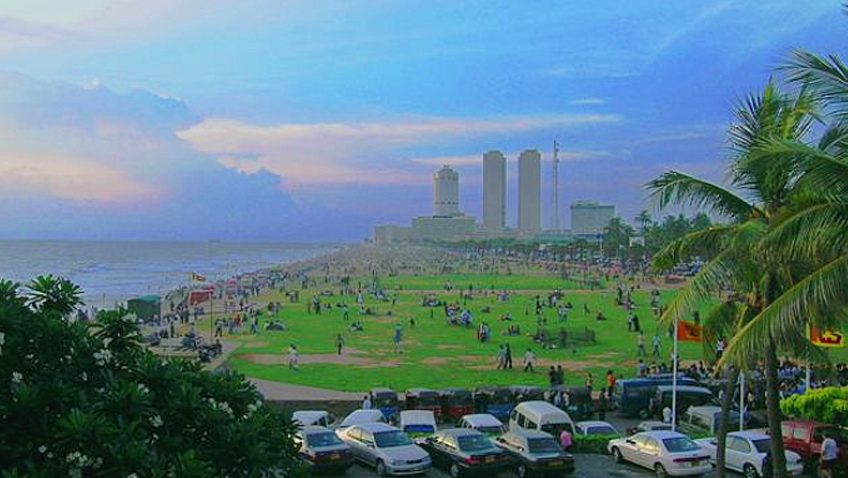 The much famed Galle Face Green is in fact a large grassy ground overlooking the ocean. It has become customary for locals to gather at the ground with families for picnics. Furthermore, the Green is also popularly transformed into an open-air theatre for concerts on special occasions and festive celebrations.

Aside from the virtue of its location, it is also adorned by a line of food vendors who have been making trade there for generations. A delectable array of cuisine is served along the walkway that runs with the green on one end and the Indian sea on the other.

Sunday evenings are perhaps the most populated at the Green with many families gathering to make merry. Children at play and vendors of balloons and simple handmade toys are common sight  on these evenings.

The variety of street food available along the walkway is the main reason that the Green attracts  many tourists and young adults. A calming stroll along the shoreline and a simple dinner in the company of the open air and sea breeze are arguably the most alluring of pastimes.

A comprehensive range spanning from Fried Rice, Shawarma, Paratha, to Barbecued Chicken are available at the stalls,[m1] . A deep fried flour based patty topped by shrimp or crab are a popular signature food item known locally as ‘wadei’.

With the cityscape spanning from the edges of the city, the Galle Face Green offers the best perspective of Kollupitiya  and a quiet escapade from the hustle of the city, despite being at the very heart of it. The surroundings of the Green are richly adorned by the best City Hotels in Colombo including the alpha male of the lot – The Cinnamon Grand. [m2] . Many restaurants bars are situatued in close proximity to the Green as well, placing it in the centre of many popular night life attractions.

The promenade as it is seen now was laid out by the British Governor of what was then Ceylon, in 1859. The 5 hectare strip of land was initially utilized as a golf course and horse racing course. Originally the lawn of the Green was cleared by the Dutch to allow a clear line of fire for the cannons deployed at the Fort. In addition to its rich history, the Green is also a popular destination of choice for kite flying and doubles up as a favourite location for fitness enthusiasts, who gather at the Green in the early hours of the day. Given the close proximity to the Naval Base, it is also common sight to catch the Navy sports teams engaged in their physical training at the Green.

Whether it’s an evening spent with the ocean in view under the open skies or a night of fun and frolicking in the outdoors, the Galle Face Green is one of the best publicly available areas designated for good cheer in the heart of the commercial capital.