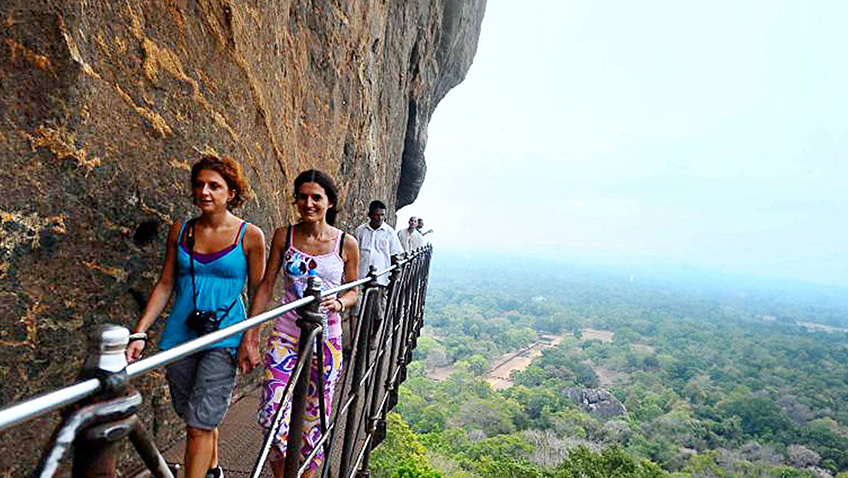 We arrived at Colombo airport in the sticky still of night, struggling with the driver to tie a surfboard to the roof of his saloon, before setting off for the north: Tamil country. We were heading beyond Sri Lanka’s former frontlines.

On the car radio, a phone-in show was at full throttle. A monk raged in Sinhalese about potholes, vowing to blockade the road. My partner and I sped past well-trodden Negombo and Kannndy, past trenches, commando jungle bases and cows dozing on the hard shoulder. Our destination was the north-eastern harbour of Trincomalee. During the drive over the island’s green belly, slowing for the military roadblocks and barbed wire, the triumphant murals of the president, Mahinda Rajapaksa, gradually thin out and vanish.

The 27-year civil war ended in 2009. Up here, where the fiercest fighting took place, reports of persecution are rife. The army rules the country’s Tamil minority with a whip hand – and tourism development dollars in the other fist. The military is expanding its own hospitality portfolio. Meanwhile, Britain and the US are pressing for an international inquiry into alleged war crimes. Thousands of people have been “disappeared” – at least 5,676, mostly Tamil, according to the UN. Trincomalee – or “Trinco” – was shelled by both sides during the conflict, with horrors visited upon its people. But now the town – a mix of Tamils, Sinhalese and Muslims – is back on its feet.

We arrived just in time for the Maha Shivaratri festival, Hinduism’s night of the all-powerful Lord Shiva, and we appeared to be pretty much the only Western tourists about. Our toothy tuk-tuk driver, Suresh, greeted us enthusiastically. “Guests didn’t come before! A lot of fighting, bombing. Lot of people died. At the lagoon. You are welcome.”

We got stuck behind a fisherman cycling in huge waders. A cow changed lanes without indicating. As Suresh bounced us through town, we saw a crash: a motorcyclist carrying a nine-foot ladder lost control of his cargo, wiping out a rider behind him, an unhappy-looking fellow with a long moustache. Mercifully, scrapes and twisted ankles were the worst of it. Past the deserted fish market and the special-forces unit jogging in formation at Fort Frederick garrison – skull and crossbones badges on their black uniforms – we reached Swami Rock, Trinco’s highest point.

Suresh’s three-wheeler protested at the steep climb. At last we reached the venerated Koneswaram temple, perched on a cliff-top 400ft above the waves and home to the lingam – a Hindu holy phallus. Young Sri Lankan couples smiled shyly and welcomed us into their temple, friendliness a substitute for any common language. We walked barefoot on the sand, having washed our feet. The shrine draws pilgrims, especially newlyweds wanting to start a family, who tie bright ribbons in the trees. Standing on the cliff edge, one young man set fire to a coconut’s hairy husk. Holding aloft the flaming fruit, he muttered a few pleading words and hurled it on to the rocks. Smashing the nut in to as many pieces as possible symbolises the banishment of problems, a bystander explained.

For these Sri Lankans, whose lives have been coloured by war and tsunami, the longing is understandable.

Stopping in town to buy provisions at a little store, we were again ushered inside a Hindu temple by worshippers: the Sri Pathrakali, a squat tower draped in statues and dazzling white lights. Generations of families had gathered, the women in colourful saris, men in short-sleeved shirts. It was a revelation, a sensory feast: gold columns, kaleidoscopic ceilings, heaped flowers, the air loaded with incense. What I mistook for noisy piped bird music was in fact the chorus of hundreds of songbirds flitting between pillars.

We were staying in a beach bungalow at the Chaaya Blu hotel, which during the war was sandwiched between the military and the Tamil Tigers, but is now run by a leisure group. Look left from your sun-lounger and you can see the guerrilla bunkers. To the hotel’s right, beyond the fishermen mending their nets, an army pill box and a watchtower. The staff is a mix of Sinhalese and Tamil. One chef, Mala, who makes mean egg hoppers (breakfast pancakes), is a single mum to two girls and two boys. Her husband was a businessman in the northern Tamil city of Jaffna, who died in the war – she makes a trigger shape with her hand not holding the ladle.

Sri Lankan food is catching the attention of the world. Up here I ate the best curry I’ve ever tasted: Jaffna crab, a rich pot of juicy lagoon crab saturated in spices, strong moringa and kothamalli (coriander) with a hint of cream.

Sri Lankan cuisine distinguishes itself through the freshness of herbs and the longer roasting of spices, drawing on the old influences of Arab and Malay traders. I enjoyed dhosa – pancakes stuffed with vegetables – smooth dahl, curried ladies fingers, crispy “papadam” twirls and the abundant seafood. For a snack, try devilled cashew nuts with a cold beer. Braver diners should ask for the chilli and coconut condiment pol sambol.

The north-east offers decent diving. So the next morning we sped up the coast in a small launch with captain Raj, bouncing through the chop on our way to Pigeon Island to see octopus and shark. The deserted white-sand beach stretched for miles, deep palm groves right up to the surf. This marine national park – the island itself is only about 200 yards long – is popular with Sri Lankan day-trippers. As we snorkelled in the coral shallows, we were visited by a big black-tip reef shark, who hovered, inspecting us – then panicked and spun on his tail when I could hold my breath no longer.

We amused the locals by scuba diving directly off the beach, photographed like spacemen as we waddled into the surf. A baby octopus hitch-hiked a ride back into our boat and had to be delicately unplucked and released.

I was sad to leave sleepy Trinco, a town with three millennia of startling history. But we had hotel bookings further south.

A lightning storm raged in the hills as we crossed the island, huge bolts cutting sideways through the sky. “This is the most dangerous road in Sri Lanka,” lamented our driver, Sisira, as a bus driver tried a crazy overtake.

To break the journey, we slept at a hotel by the lake in Colombo. The rowing teams distracted me from breakfast and the front-page headline of the Sunday Observer: “Another ploy of Western powers to subjugate Sri Lanka.” The capital buzzes with reconstruction – new hotels, shops, motorways.

We also stayed three nights at the tranquil Cinnamon Lodge in Habarana, north of the island’s centre, where we watched goannas hunt on the lawn and macaques with terrible centre-partings squabble in the trees. We feasted on fragrant curries and went on an elephant safari; our guide, Lal Abeyrathne, found 90 for us in an afternoon – calves, pregnant mothers, big bulls. We climbed 600 feet up the ancient Sigiriya rock to admire fruity cave paintings and look out over the hills and vast lily lakes. We laughed nervously at the sign: “Keep still and silence in a wasp attack.”

A two-day stop at surf town Hikkaduwa, down near the fortress city of Galle, let us swim with enormous sea turtle and catch waves with dreadlocked locals who live in thatched apartments on the beach.

Our final destination was a spot in the furthest south unknown to many, reached via a succession of narrow tracks. The small town of Talalla has little to offer visitors but serenity and mellow green waves. Our room at the independently owned Talalla Retreat was 12ft above ground. It had a roof but no sides. The open-air shower was good for muggy tropical nights, a blissful icy deluge beneath the fireflies and stars. How better to shatter this peace than a 5am alarm call? A tuk-tuk driver arrived before dawn to take us the 15 miles to Mirissa, a sleepy little beach resort with a remarkable story. Until 2006, no one – fishermen, the tourists dozing in hammocks, or scientists – had any idea that the largest creature ever to have lived on Earth was swimming just a few miles off these beaches. It turns out that a large resident population of blue whales, which grow to 30 yards long, can be reached in half an hour by boat. Worth waking up early to marvel at this elusive giant, I thought.

We signed up with Raja and the Whales, a respectful, environmentally friendly family outfit run by a former fisherman. We paid 6,000 rupees (£28) each for the outing, including breakfast, and 2,500 rupees (£10) for the tuk-tuk there and back. We weren’t far out of port, admiring flying fish, when the captain suddenly killed the engines, leaving us bobbing in the swell. The beast surfaced with a huff not 40 yards away. Its snout broke the surface, ploughing through the water, a cavernous blowhole blasting spray high above us.

He was a large male coloured deep petrol blue. Only when he went to dive did you realise how much was hidden beneath the water: it took an age for him to arch through the air, and then an enormous tail burst up, the width of a small plane’s wings, gallons of water pouring off it. Slap.

We got lucky. Before most people on dry land had eaten their string hopper, we’d seen six blue whales. In fact, you’re so likely to see blue whales off the south of Sri Lanka that Raja guarantees everyone a refund if there’s a no-show.

This very sudden discovery shows how little we still know about the creatures in our oceans. And the big challenge for the government will be how to regulate all these boats out on the water. We watched cowboy operators harass the whales, chase and crowd them, force panicked dives – all breaches of the (for now voluntary) code. The fear is that the whales will be driven away through stress, or into the busy shipping lane nearby, where even this giant has become ocean roadkill.

With the civil war over, it is finally possible to explore Sri Lanka’s north and east, and to enjoy Tamil culture. In the south, a whale-watching industry has been born. With friendly people, delicious cuisine and an enviable natural bounty, the whole island has so much to offer. Old hatreds and fears have not magically disappeared, but tourism carries huge potential for regeneration, if the fruits are shared. Until the government stops persecuting its critics, both sides acknowledge their atrocities and reconciliation becomes possible, there may be peace here, but paradise will have to wait.