Home / Activities / Its another Whale of a Time! 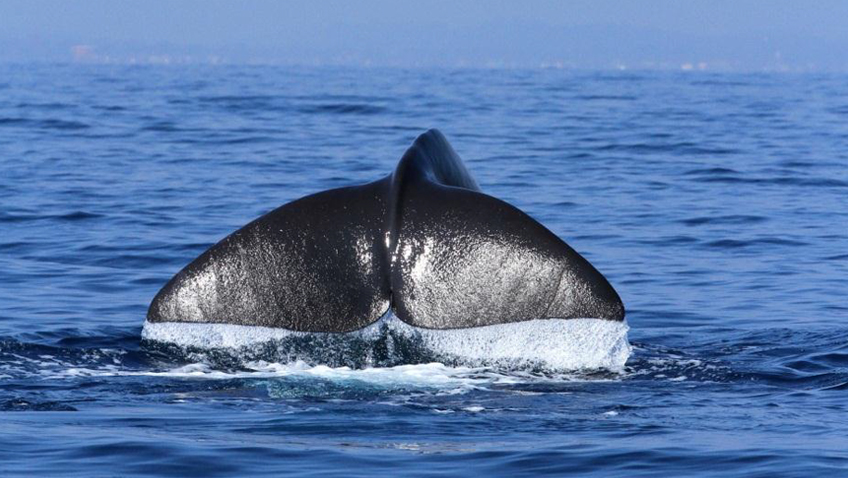 Its another Whale of a Time!

My mind runs back five years when Nature Trails were trying to establish whale watching in Trincomalee soon after the guns fell silent in the eastern seas. Nilantha frantically called me from sea perhaps 15 nautical miles southwards from ‘Koneswaran’ confirming that he’s with five blue whales at sea. Elated, I informed Dr.Charles Anderson who was with me at Yala on a leopard safari and we hurriedly drove to Trinco and head to sea in our continued efforts to re-establish Sri Lanka’s city by the sea as its second whale watching location. The logistics was a far cry from what we enjoy today, Vannam – our faithful boatman in his seat-less 19 foot fishing craft with a makeshift wooden plank to sit on, took us out to sea, powered by a fifteen year old 15 horse power kerosene engine. And we did see a single Blue on this recce too confirming our previous sightings and the consensus was that we could effectively announce that we’ve rediscovered the lost whales in Trinco.,

Five years hence, three consecutive years we’ve seen the phenomenon as Gehan tags as the super pod of sperm whales, we were as excited as our first recce when the seas settled down in Trinco towards end February 2014.

The season sets in late in February and my senior naturalist Daya heads out to sea almost rediscovering the whales each year and the rush to see the new seasons first blue on the eastern coast hasn’t dipped one bit. Forth week Feb – Daya reports seeing five blues 17 miles at sea, and the seasons begun.

Dr.Charles Anderson, a British born marine biologist and a pioneer in establishing whale watching I Mirissa was set to arrive in Trinco to work with Cinnamon Nature Trails from the 9th of March 2014. Almost simultaneously, expert marine naturalist, underwater photographer Tony Wu was scheduled to work with Daya for two weeks in their efforts to find the super pods of sperm whales.

Alas, as the expert crew assembled to head towards their expedition, the winds turned and gushes of fifty miles per hour winds created swells three to four meters high. Three consecutive days of watch by the Chaaya Blu beach yielded zero opportunities to spend quality time at sea. The teams switched to plan B, it was time to head towards Minneriya national park and enjoy another gathering, elephants. Dr.Anderson headed to Wilpattu with CNT naturalist Gayan and spent five days tracking leopards while Tony and his team spent almost the same time based at the Cinnamon Lodge – photographing the great
land based mammals frolicking at Minneriya during the extended Gathering after the failure of the north east monsoon. Elephants in numbers kept us busy till the winds settled.

Daya kept vigil by the beach at Chaaya Blu, and the winds just dipped enough when he recalled the teams back to Trinco and with no time wasted, both Dr.Anderson and Tony was at sea still pounded by two meter swells.

First day at sea – almost as if the whales were trying to make up for the lost time, nine blue whales surrounded by 75 sperm whales performed to the teams delight. Day two – the team finds Trinco’s super pod of Sperm whales just 18 miles at sea. Nilantha counts hundred of the oceans largest toothed predator and looses count, while Tony captures an amazing series of social behavior of these gentle giants below the surface of the water.

Amazingly, on the 3rd day, the team stumbles upon its first male sperm whale, almost 18 meters in length dwarfing all other whales in the vicinity. The distinctive pounding of its sonar was felt and recordings of these will be of much interest for science, while time spent with such intelligent mammals at sea will always be cherished by Daya and Tony this year. The super pod stays within striking distance of Chaaya Blu for almost a full week before breaking up to smaller groups while loosely in touch now spread across a 5 – 7 mile radius.
We then have another day of superlative sightings of Blue whales, fifteen of them at complete ease, feeding and gently gliding across the calm ocean much to the delight of the whale watchers.
A British whale watching group in Trinco were literally lost for words of this encounter and back ashore, one of the senior citizens expressed his experience as the best in 34 years of wildlife viewing across the world. Sri Lanka’s diversity when compared with much lager destinations is almost unmatched – we certainly are the only destination in which the largest land mammal and the largest animal that ever lived being the Blue whale can be seen within the space of three hours travelling time.
This speaks heaps of this island nations ability to be among the worlds top wildlife destinations today. Cinnamon Hotels and resorts are privileged to be operating in such an Island and Cinnamon Nature Trails will continue to spearhead responsible nature based tourism, while always lending our expertise and resources to further research and understand these amazing species that we are blessed to have in Wild Sri Lanka.

This years observations will be sent to the Wildlife department with detailed images and GPS locations adding to our ongoing efforts to keep vigil on Trinco’s whales including its super pods with much care, assisting conservational efforts of all marine mammals in Sri Lanka’s oceans.