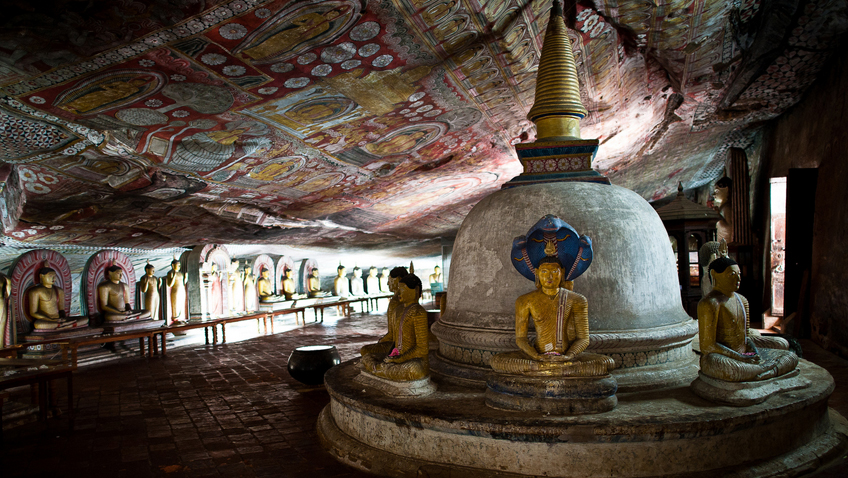 Atop the famous Dambulu-gala (Rock of Dambulla) is perched the Dambulla Raja Maha Vihara that give the rock and the surroundings its character.

Within the caves of this temple one can find ancient murals that has commonalities with Buddhist, Hindu and even indigenous culture and traditions. The Raja Maha Viharaya has five caves with accompanying courtyards. If you were to stand on the central courtyard you will be able t see the entire valley below and is one of the best views from the Dambulu-gala.

Cave One – Devaraja Lena “Cave of the King of Gods”

This cave houses some the oldest frescoes in the temple and can be seen behind the depiction of Arahant Ananda – considered to be Lord Buddha’s closest disciple. Despite the fact that these frescoes have lost its colour due to time and also the smoke emanating from the worship lamps, you can still appreciate the fine detail of the paintings.

The entrance to the cave is adorned by a makara torana (Dragon Pandal), the inscription that accompanies it is said be recorded in the 1st century B.C. and is identified as being written in Brahmi. Inside there is a 15-metre long reclining statue of the Buddha. The Hindu deity Vishnu, “King of the Gods” or Devaraja, is believed to have used his divine powers to create the caves, hence the reason this name is employed. The deity may have been installed here in the Kandyan period, though some believe it is older than the Buddha images. There is a Vishnu dewale or shrine attached to this cave.

This is the largest cave at the temple, containing 16 standing and 40 seated statues of the Buddha. In addition, the Hindu deity Vishnu and the local deities Saman (gold in colour) and Upulvan (dark blue) are represented, as are the “Great Kings” of the cave’s name, King Vattagamini Abhaya and King Nissanka Malla, who were responsible in the 12th century for the gilding of 50 statues.

At the right of the entrance is a small dagoba surrounded by seated Buddhas.  Beyond, at the back of the cave, is a large reclining Buddha image dating from the 19th century.  The ceiling, which is covered with colourful murals, has a small crevice from which water has dripped for thousands of years. This comes from a pool at the summit of the rock that has never dried up. The water that drips into a pot inside the cave is considered sacred. Moreover, devotees believe the water has miraculous properties and toss coins into the pot.

Although there are places where the paint has disappeared or is blackened with smoke, almost all the rock is still covered with murals, which are colourful but always tasteful. If you stand in front of the main Buddha image and looking upwards you will see scenes of the Buddha’s life, including his birth, education, the attainment of  enlightenment, illness, old age, his passing away and cremation.

There are several large panels with murals that stand out. One features the scene of Mara, Lord of Illusion, endeavouring to disturb the meditating Buddha. In the upper right hand corner Mara approaches on his triple-headed elephant, while at the bottom he is seen falling from his mount, defeated in his purpose. A smaller panel to the right features Mara’s daughters, sent to distract the Buddha with their captivating dancing.

In contrast, a larger panel towards the middle of the cave depicts the Buddha surrounded by an elaborate corona delivering his first sermon in the Deer Park at Isipathana. Disciples sit below him while graceful multi-coloured gods gather around. Above are the sun, the moon and the hare-in-the-moon.

This is the second largest cave in size and second in splendour only to Cave Two. It acquired ceiling and wall frescoes during the reign of King Kirti Sri Rajasingha (1747-1782), the great Buddhist revivalist. His statue stands in the cave, along with 57 Buddha images. The central Buddha image is a seated one. In addition, there is a huge reclining Buddha lying against one wall. The richly coloured murals show hundreds of Buddhas in identical postures. On the outer wall of the shrine there is a stylized mural depicting a Himalayan lake in which the Buddha is supposed to have bathed. It is depicted as square with four gateways, each symbolized by an animal – lion, elephant, horse and bull. From this lake flow four rivers.

This, the smallest of the cave temples, was the westernmost until Cave Five came into being. The small dagoba in the cave, known as soma chaitya, was damaged by thieves who broke into in the mistaken belief that it contained the jewels belonging to Queen Somawathie, the consort of Dambulla’s patron, King Vattagamini Abhaya.

Once used as a storeroom, this temple is the most modern of the five. Restored and almost entirely repainted in 1915, it contains a dozen Buddha images of brick and plaster – including one large reclining statue – as well as the Hindu deities Vishnu and Kataragama, and the local deity Bandara.

Tradition states that King Vattagamini Abhaya (89-77BC) spent 14 years in exile in the caves that now comprise the temple known as Dambulla Raja Maha Vihara. So it was that when he regained his throne from invading South Indian kings he founded the temple in gratitude. Over the past 2,000 years the caves have been restored and repainted several times by later kings, most notably by Nissanka Malla in the 12th century and Kirti Sri Rajasingha in the 18th century.

Note: Make sure to go to the temple properly attired, i.e. in shirt and trousers or modest blouse and long skirt.