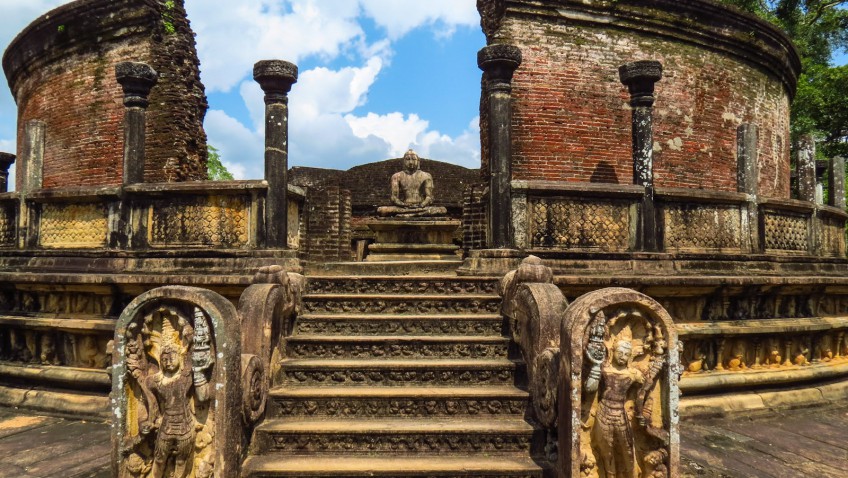 5 Things you didn’t know about Polonnaruwa

Thousands of visitors come to visit the once great kingdom of Polonnaruwa. Stupas, statues, tombs and temples are aplenty, making for an unforgettable experience. But there is more than history and ancient structures here; Polonnaruwa has the richest of stories among Sri Lankan history with hidden treasures strewn across the district and town.

We’ve uncovered 5 lesser known things about this magical old kingdom that might turn your trip into the best discovery ever.

Yes, you did read that right. There’s a strict no-bull policy that went into the sculpture and production of moonstones. Moonstones are the traditional semicircular base at the entrance to state and religious buildings, usually adorned with rows of animal figures. While its neighbouring kingdom Anuradhapura houses moonstones with cattle, the Hindu influence of the Polonnaruwa era shows to have removed the animal representing Lord Shiva’s mount, Nandi the bull from their entrances.

The critically acclaimed Monkey Kingdom released in 2015 by Disney Nature was shot entirely in Polonnaruwa. The film, narrated by Tina Fey follows a troupe of Macaques living in the ancient ruins in the Polonnaruwa jungles. The documentary is a breathtaking representation of Polonnaruwa and its world of hidden treasures. The legendary primatologist and Disney Nature Ambassador Dr. Jane Goodall also visited Sri Lanka, joining the crew in the Polonnaruwa jungles. When you visit the ruins, remember to watch out for the monkey whose kingdom this is today.

The famed 80’s synth-pop band Duran-Duran spent a considerable amount of time in Polonnaruwa which went on to feature heavily in the music video of their 1982 hit Save a Prayer. The video features the band amidst the ruins – something you won’t be able to do now. Polonnaruwa is a UNESCO World Heritage Site and sacred to Sri Lankans.

Ancient Sri Lankan architecture isn’t the only element on historical wonder; our ancient engineering techniques are still revered among archaeologists and engineers today. Both elements feature in harmony in Polonnaruwa, so when you visit the ancient sites don’t forget to also visit the breathtaking vistas of the district’s many ancient, manmade lakes. Jananathamangalam. In 1012 AD, Sri Lanka briefly fell under Chola rule at which point the kingdom absorbed many elements of Dravidian culture.  The Chola empire would refer to Polonnaruwa as either Jananatha Mangalam or Jananatha Puram and called Sri Lanka, Mummudi Sola Mundelam.