Home / Activities / What to Eat in Sri Lanka 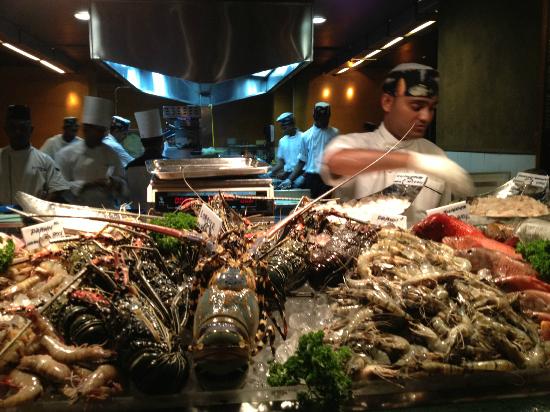 What to Eat in Sri Lanka

Although the Sri Lankan staple is Rice & Curry, there’s much more to eat and enjoy during your holiday. Don’t miss any of these exotic delights.

Indian Ocean deep sea fish like tuna, swordfish, seer and shark, as well as smaller reef fish, are readily available and can be prepared exactly as you wish at your hotel or at beachside restaurants. Ever popular is lobster, while freshly caught crab served in Trincomalee and Hikkaduwa as well as in various styles in specialist restaurants in Colombo, is famous.

Calamares (squid) are caught locally too and can be enjoyed stuffed or sliced and fried in battered rings or tossed in garlic and lime. Sri Lanka’s succulent prawns, whether served in a creamy curry or the Jaffna way prepared in a thick chilli and tomato-based sauce, or simply with garlic and coriander, are scrumptious.

You’ll be amazed at the varieties of curry available depending on whether you’re having curry from a tourist hotel’s buffet, in a village home or country resthouse, and whether it’s prepared southern style (saucy and subtle) or northern style (dryer and more pungent). Curry tastes more distinctive when it’s cooked in a clay pot over a wood fire. Chicken, meat or fish curry make up part of the traditional Sri Lankan breakfast, accompanied by items like Seeni Sambol, (a relish of fried sliced onions, sun-dried fish chips, spices and sugar) or Katta Sambol (a condiment of grated coconut mixed with chillies and lime).

This kind of breakfast is enjoyed with hoppers, a kind of crepe, often with an egg baked in the centre, or with string hoppers, a kind of vermicelli nest. The curries are also eaten with rice and, on special occasions like the first day of the month, with chunks of creamy milk rice livened up with garlic slices. This is the Sri Lanka term for small snacks and can include hoppers as mentioned above as well as snacks such as fish or vegetable stuffed samosas, and cutlets (deep fried balls of potato and minced meat, chicken or fish). Wadai, a deep fried lentil and chilli cookie is another favourite short eat.

A more substantial snack is called Kottu Roti and consists of roti (flat baked soft dough) chopped on a hot plate with flair and lots of noise while mixing the cut pieces with raw or cooked vegetables and meat and sometimes an egg.

Some of Sri Lanka’s fruits are familiar in appearance but their taste will be more enticing than you’re used to, not only because of the freshness but they seem sweeter too. You won’t need sugar if you try them juiced.

An example are pineapples, which are so sweet, Sri Lankans like to eat them in slices dusted with chilli, as sold by vendors in pineapple country some 16km from Colombo on the A1 highway to Kandy. From Jaffna in the north come juicy mangoes while unripe green mangoes can be served as a curry. Papayas, too, seem to taste sweeter in Sri Lanka, especially when eaten with a squeeze of lime juice. Sri Lanka is reputed to have some 29 varieties of bananas and these are offered to visitors at every homestead. Some are tiny, some fat and pink in appearance, some exquisitely sweet. Coconuts, of course, abound. A popular drink is thambili, the liquid obtained from a golden-hued coconut whose soft flesh looks like the white of a poached egg and tastes heavenly.

Unfamiliar fruits include rambutan whose bristly skin peels back to reveal sweet colourless flesh around a seed, and mangosteen. This has a hard, dark skin that when split open yields sweet, juicy white segments of flesh. Both can be bought from wayside vendors from June to August, especially at Kalutara, 43km from Colombo.

If you’re an adventurous foodie, then be sure to try durian. Protected by its green, spiky skin and rampant pong, its flesh is ambrosia to addicts, and nauseating to others. It’s to be seen, and smelled, on sale from May to August beside the highway to Kandy, particularly at Hingula, some 95km from Colombo.

Taste genuine buffalo curd, and afterwards yogurt will forever seem insipid. It’s made from curdled buffalo milk in the clay pot it’s sold in. The best place to buy it is in the deep south of the country, especially on the road to Yala, 260km from Colombo. It’s also available in plastic containers but that doesn’t have the same consistency (it should be thick) or smoky taste.

Buffalo curd trickled with sugar palm treacle is a classic Sri Lankan dessert. Jaggery, a fudge-like confection made from boiled and stirred palm treacle, is often nibbled as a sweetener with plain tea, instead of sugar.

It’s part of holiday fun to try every dish and dessert that Sri Lankans enjoy. You’ll be surprised to discover that Sri Lankan cuisine is not all chilli and curry.