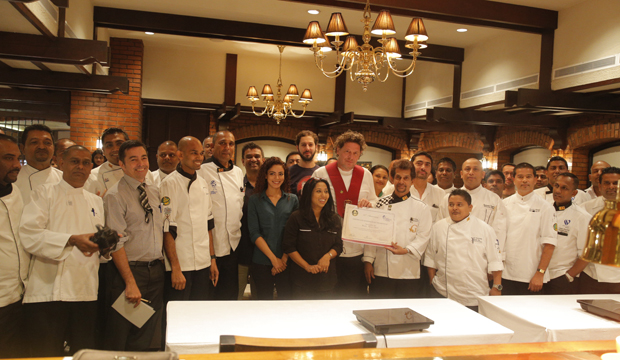 Cinnamon Hotels & Resorts hosted celebrity three Michelin star chef and Judge of MasterChef Australia – Marco Pierre White on a tour of Sri Lanka from the 18th – 30th January 2016, flown down courtesy of the national carrier SriLankan airlines. One of the many sub events Cinnamon conceptualized and executed was the ultimate “Master Class” for executive chefs and culinary professionals of Sri Lanka.

At the exclusive Master Class organized for 50 Sri Lankan Executive Chefs by Cinnamon Hotels & Resorts the Chefs Guild of Sri Lanka presented Chef Marco Pierre White – fondly known as the Godfather of Modern Cooking with an honourary membership. He is the first non – Sri Lankan to receive this honour.

Marco Pierre White arrived at the Master Class after breakfast at the Temple Trees since the Prime Minister spontaneously invited him for breakfast after attending one of the dinners organized by Cinnamon Hotels & Resorts.

The celebrity chef provided a “hands-on” learning experience to the entire industry of Sri Lanka and covered a series of themes relevant to chefs and culinary professionals. All participating chefs were given the opportunity for a sit down lunch with Marco himself. Marco had a one-on-one engagement with the participants and created one of his very own signature dishes for the chefs.

A high level “Master Class” such as this by a three Michelin star chef had not taken place in Sri Lanka previously. This event was therefore arguably one of the best opportunities that have been created for the Sri Lankan culinary professionals of the industry. All executive chefs that participated in this master class received a certificate of participation from the Chefs Guild Sri Lanka together with World Association of Chef Societies (WACS) and was signed off by Chef Marco Pierre White himself.