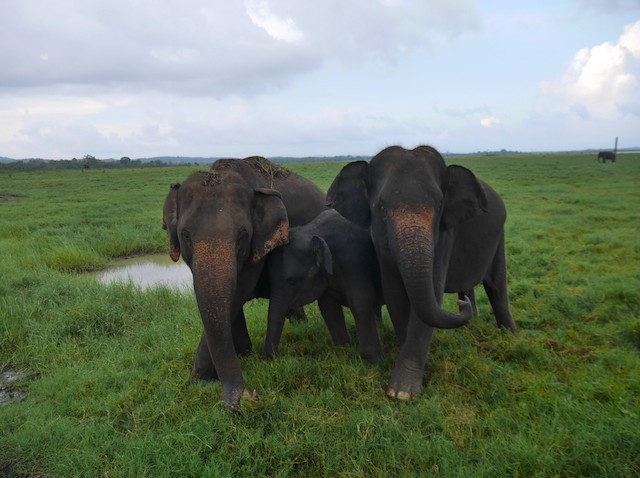 They’ve almost completely surrounded us now. There are four behind us, five to the left and one 12 foot tall mammoth to the right. Foot by foot they converge on our jeep. Their deep growls reverberate into my chest. Their prehistoric trumpets pierce my ears. They stare at us with unwavering blood red eyes. In them I see myself. I see panic. I see an animal ready to take flight for its life.

Suddenly the engine roars. But as the jeep thrusts forward, the heard begins to charge.

The driver instantly slams on the break and we glide to a muddy stop. The heard pauses, their eyes determined, their stance aggressive.

I can sense the drivers fear now. He yells towards the big one, half demanding and half pleading for it to stop it’s advance.

But the standoff continues. Seconds seem like minutes. I consider my possibilities. I could run towards the lake. I might not make it but it might buy some time for my fellow travel bloggers to escape.

I can’t take it anymore.

Yala, yala, drive! I scream like an angry Egyptian cab driver, looking ahead towards our only escape.
The driver hits the gas. For precious seconds the tires spin helplessly in the mud. Suddenly the jeep catapults us forwards.  And then by some divine hand, the elephants are held back. The jeep races to safety. We escape, but our racing hearts are still trapped within the elephants crosshairs.

I’ve felt threatened by animals before, by alligators in Australia and crazy monkeys in India. But I’ve never experienced the kind of primitiv e fear that a heard of angry wild elephants can invoke. It was terrifying yet awe inspiring, and it provoked a renewed respect for the natural world and these incredible mammals. I have never felt more alive and more grateful to be alive. If you’re looking to roam among wild elephants, Sri Lanka’s Kaudulla National Park is where it’s at.

This awesome elephant encounter is thanks to Travel Blog Conference Asia 2014. It’s a 5 day conference/tour with 50 other travel bloggers hosted by the PTBA, Sri Lankan Airlines, Cinnamon Hotels & Sri Lanka’s only domestic airline, Cinnamon Air. It’s the first time I’ve ever taken a tour or traveled with a group and I love it more than my beloved sugar cane juice.

Leif Harum was hosted by Cinnamon Hotels & Resorts and SriLankan Airlines in partnership with the Professional Travel Bloggers Association for TBCasia – Asia’s First Ever Travel Bloggers Conference 2014 in Sri Lanka.