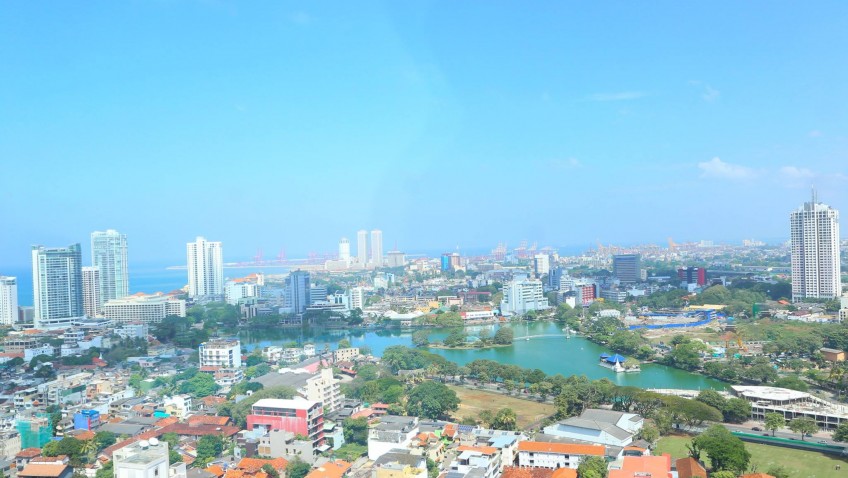 Colombo is a beautiful city.

But even better, it’s a small, beautiful city. Unlike the teeming vastness of New York, or the byzantine mazes of London, Colombo, the financial heart of Sri Lanka, is a mere 37 kilometers square – just an hour’s drive in either direction. This is good, because it means you can explore almost all of it in just 24 hours.

Colombo Fort, or Colombo 01, was once a major military base. Now it’s the business end of the city. Literally. Not only to the railway lines connect here, it’s also got some of the most prominent hotels in the country, the Colombo harbour, the Stock Exchange and a number of important ministries. Right now, it’s a quaint mix of modern and colonial architecture dotting narrow, busy streets, with hotel glamour and pubs vying against facades and shops and newly renovated buildings of Dutch and British descent.

The best thing to do would be to get here at dawn, and make your way over to the intersection where Galle Road merges with two others, one leading into the morning traffic rush and the World Trade Center, the other dividing the Galadari and the Old Parliament building, the brown one with the statues facing the sea.  All of this is neatly ringed by a road that circles back into itself.

There are quite a few offerings at the Dutch Hospital, which has now been converted to a boutique restaurant-slash-trinket shopping experience.  Or there’s the World Trade Center across the street, which also houses places ranging from cheap and functional to slightly fancier franchises – Breadtalk, a Coffee Bean and a Barista are on the second floor. From here you can watch Colombo shake off the night and begin work. Coffee (or any other morning beverage) will cost you anywhere between Rs 300/= to Rs 600/=. Food is on the pricy side on Colombo streets. Stuff at Dutch cost between Rs 500/= to Rs 1000/= per item, depending on what you’re eating. Pastry-shop items will cost a lot less.

Once you’re done, it’s time to head into Pettah. Ask for directions to the train station. Keep along the left hand side of the road until you start encountering hordes of street vendors hawking everything from fruit salad to cheap electronics. Congratulations – you’ve arrived at Pettah.

Pettah is a maze. Even though Pettah and Fort are positively centimeters from each other, they’re worlds apart in feeling. Pettah is a ramble of shops selling practically everything you need to buy, all narrow streets running into each other over and over again, and even Sri Lankans can – and do – get lost in here. Going in there for food may not be the wisest of ideas, but the eye certainly does not go wanting.

Expect to spent a couple of hours wandering these streets. While Google Maps has these streets on record, nobody really has the shops, and you might find yourself on the ultimate window-shopping spree. If you need food, look for the Floating Market nearby – it’s a recent construction that provides a quiet space to munch something.

Prices are much, much lower here, though the taste takes a bit of a plunge as well. The average drink costs around Rs 50/=. Food costs between Rs 200/= to Rs 300/=. If you’ve chosen right you walk away with some really good value for money. If not – it’ll still be filling and worth the price, though you’ll walk away feeling that you could have taught the chef a thing or two.

If Fort is the heart of Colombo, its kidneys would lie somewhere around the Colombo Municipal Council, referred by all and sundry as the Town Hall. This area is called Cinnamon Gardens, because yes, once there where entire crops of cinnamon being grown here.

There are two ways of getting here. One is to take Galle Road and cut across; the other is to take the longer, but more satisfying road that goes past Cinnamon Lakeside, turns in near the Air Force headquarters, and goes towards the public library. On the way, you can stop by the Gangaramya, one of the most important temples in Colombo. It’s a curious mix of Sri Lankan, Indian, Thai and Chinese architecture, and floats out on the man-made Beira Lake. Between here, Borella and Thummulla are the best-developed residential areas of Colombo, which means it’s also got some of the best coffeeshops, slightly upmarket hangout spots, schools, parks and grounds.

For example, turn into Park Street and you’ll find yourself in the quintessentially urbanite Park Street Mews venue. Get to Town Hall and opposite the hulking white British build you’ll find the neatly maintained green haven of Viharamahadevi Park, which is definitely worth a stroll around. The Sri Lanka Tennis Association is nearby.

On the other side, towards Ward Place, is an ODEL – basically, a posh, streamlined and expensive consolidation of the Pettah experience. Cheap flip-flops? Nah. Expensive tea and T-shirts? There’s also other various outfits you find down Ward Place. Coco Verandah, Cioconat Lounge, places on offshoot lanes (like the Barnesbury on Barnes Place) abound here.

Or you can make for the Independence Square, a beautifully kept patch of land that is a stone’s throw away from Racecourse. In this is the Independence Memorial Hall, a national monument to celebrate the liberation of Sri Lanka from British rule. It’s possibly the best personification of Colombo – a touch of heritage, a hint of ancient culture, threaded through with the tenets of modern civilization – joggers with iPods, McDonalds and small restaurant / bar combos that will be flooded by dusk.

All of these abound in a rough triangle. Grab a bit of lunch from any place that strikes your fancy and keep walking. Generally, a coffeeshop, or a place that brings you a menu, will match your breakfast prices, but tasty.

Or you can go Sri Lankan and duck into one of the nearby hotels, which on Lankan streets means a cheap restaurant. They serve buriyani and chicken fried rice for less than Rs 300/=, packing tons of belly-filling ballast onto a single plate. But if you’re obsessed with germs and hygiene, it’s best to stay out.

Mount Lavinia is named for Lovina, or Lavinia, a local dancer who caught the heart of Sir Thomas Maitland, who governed Sri Lanka in the early 18th Century. This slope (it can’t really be compared with an actual mountain) blends with Dehiwala, and thus becomes Colombo’s largest suburb. In Sri Lanka famous for three things: the Zoo, the famous Golden Mile of Beaches, and traffic. Don’t miss out on the zoo. It’s one of Asia’s largest, and the border between the hot daytime and the coolness of the true evening is the perfect time to go see the birds and the beasts.

Regardless of the Galle Road traffic, this stretch is a lovely place to have a spot of – well, we’d call it tea. Simply duck in through one of the many lanes that lead to the beach and presto: beach. Along the beach are scattered little restaurants. We’d recommend walking down the sands and detoxing at the Station. That puts us up neatly for the evening Galle Road Run.

Ah, Galle Road. The route that connects everything to everything else. It’s best if you start at evening, with about an hour left to sunset.

The journey through Galle Road from Mount Lavinia is an epic study of diversity. It’s also a street foodie’s heaven. You start off with a riot of Hindu cuisine, adapted to Sri Lankan palates. A good place to start is Shanmugas ’s vegetarian cuisines. Strictly not on Galle Road, but easy to run into from the journey up from the sands.

There is of course the cinema, and so on. But Galle Road’s true jewels are the Pilawoos scattered across the land-side.

Sri Lanka’s holy trinity of street food is the kottu – a powerful mash of flour strips, spices and meat; the wadey, a delicious spiced flour doughnut served with chilli pastes; and the ice Milo, without which civilization would have collapsed by now. The original Pilawoos essentially redefined street food when they decided to put cheese and roast chicken into a kottu and serve it up to the customers checking in after a night of clubbing. And voila, cheese kottu became an unsurpassed cross between delicacy and junk food. Soon after, unofficial Pilawoos began mushrooming along the road, some of them larger and better than the original, all of them hotels in the Sri Lankan sense of the term.

Traditionally, you have to sit down and eat your meal here, but since we are rushed for time, head down the Galle Road to the Barefoot Cafe. Even quote can wait, because Barefoot, a quaint cross between cafe, art gallery, clothes shop, bookstore, is something you cannot miss. It’s easy to miss, mind you, but once you find it, it’s like Colombo’s Diagon Alley – you keep coming back. Ideally you’ll arrive here just as the sun begins to set.

The food at Barefoot is great, but expensive. Expect to spend around Rs 1,200 here. If kottu calls, backtrack a bit to Bambalapitiya and the hotels that line the road. Kottu will costs around Rs 400/=. Add another Rs 100/= for drinks and you’re sorted.

Now, if you’ve done all of this, you’ll have made one thoroughly exhausting round of Colombo. Next step: find a resting place.

As you proceed along Galle Road, you’ll run into many fantastic hotels. Cinnamon Grand, with the Crescat shopping mall next door, is particularly lovely at night.

But if you’re about Colombo, make your way over to Cinnamon Red. Check in. Plus point: it’s cheaper than everything we just listed. But even better: it has a rooftop bar with the best view of Colombo, hands-down. It’s open until midnight and from this high perch you can see everything from the ocean and back, and if you’re far-sighted enough, you can even trace the roads you travelled today. Colombo looks fabulous from the air.

There and back again

24 hours is a short time, and we missed out on some places.

One of them’s quite close. If you’re up by dawn again, head back to our starting point on the Galle Face Green. Once you’re done here, pick up the walking stick and head along the seaside road. Up ahead is the Lighthouse. Just past that is a stupa suspended on what looks like a colossal tripod. And, if you’re not afraid of heights, some climbing to do. From up top you can look out over the whole of the Colombo harbor. Don’t believe me? Go see for yourself. And get back safely.