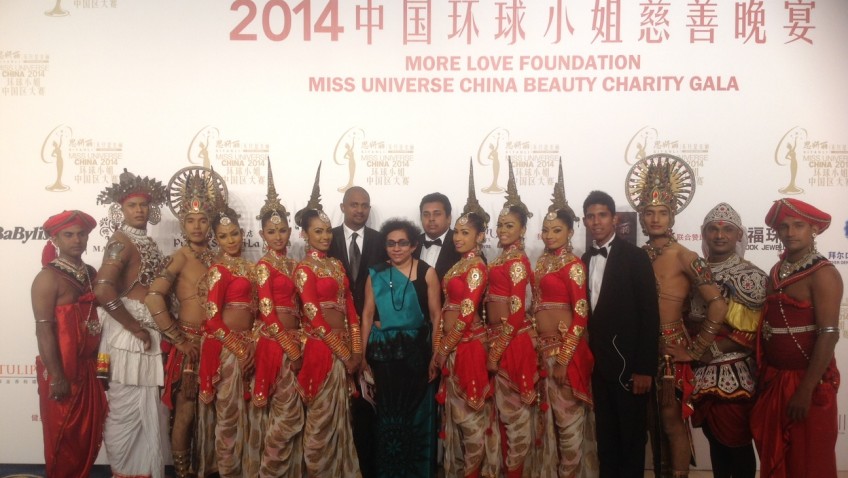 Cinnamon Hotels & Resorts in their continuous destination promotion initiatives, partnered with SriLankan Airlines in coordinating an impactful promotional campaign for Sri Lanka at the Miss Universe China 2014 Final Pageant in Shanghai just a few days before the arrival of Chinese President Xi Jinping.

Following the extremely successful Pre-Pageant Tour that Cinnamon Hotels & Resorts and SriLankan Airlines organized for the Miss Universe China 2014 Finalists during the last week of August, Cinnamon was able to coordinate significant prominence for Sri Lanka at the Main Pageant as well.

During the Pre Pageant tour the Finalists as well as the Director of the Miss Universe China organization – Yue Sai Kan, who is considered a celebrity in China, explored many popular tourist destinations in the Island while also engaging in charity activities. The tour came to an end with a Gala Fashion Party held at the Poolside of Cinnamon Bey Beruwela.

The entire contingent including the 24 Chinese Media Personnel that came down, even had the opportunity of meeting the First Lady of Sri Lanka – Madam Shiranthi Wickramasinghe Rajapaksa at a special ceremony organized on the Floating Restaurant at Cinnamon Lakeside Colombo.

The promotional activities continued all the way to Shanghai where Cinnamon Hotels & Resorts and SriLankan Airlines took a 14 member Sri Lankan Dance Troupe to the Final Pageant held on the 13th of September at the Pudong Shangri-La Hotel in Shanghai.

During the Pageant there were no less than four significant items dedicated entirely to Sri Lanka. 1. The first was the Video created on the contestant’s visit to Sri Lanka which highlighted all their activities and the picturesque visuals of Sri Lanka. This gave an insight to all the guests gathered which included VIPs from China, USA and other parts of the world as to what Sri Lanka can offer in terms of tourism. 2. The second item was the most colorful dance act performed by Chandana Dance Guild. The troupe which consisted of male and female dancers as well as drummers truly mesmerized the crowd. Their appreciation was evident by the loudest applause received at the end of the performance.

3. The third item can probably be named as the most significant. This came in the form of a Gem auction – the proceeds of which will be used for Charity, namely “Operation Smile” the signature project of the Miss Universe China organization. The Gem which was a 5 Carat Royal Blue Sapphire from Ratnapura was graciously donated by Karadana Gems which is a Sri Lankan company based in Shanghai. Mr. Panduka Karadana was called on stage to facilitate the auction together with Yue Sai Kan and the compere. Sri Lankan prominence at the event was established when the Royal Blue Sapphire was finally sold at 510,000 RMB, which is the equivalent of over Rs. 10 million – incidentally this was the highest auctioned item in the entire pageant which included four other such auctions!

4. The fourth and final ‘Sri Lankan’ item was fitting to be the last, since it was an appreciation of two organizations that have spearheaded Sri Lanka’s destination promotional activities.
Mr. Dileep Mudadeniya – Head of Brand Marketing for Cinnamon Hotels & Resorts and Mr. Chammika Iddagodage – Area Manager for SriLankan Airlines were invited on stage to draw a raffle draw which enabled a lucky winner of the audience to win an all-inclusive trip to Sri Lanka. 5. The 750 VIP guests who attended the event would have been pleasantly surprised to find a pack of Ceylon Tea included in each of their gift packs as well! The Ceylon Tea Board supported this initiative to ensure that a bit of Sri Lanka was carried home with them.

At the conclusion of the event the Sri Lankan Consulate General of Shanghai Mrs. Hasanthi Dissanayake summed it up perfectly when she stated that “this was the first ever time that a single event has generated so much publicity for Sri Lanka”.