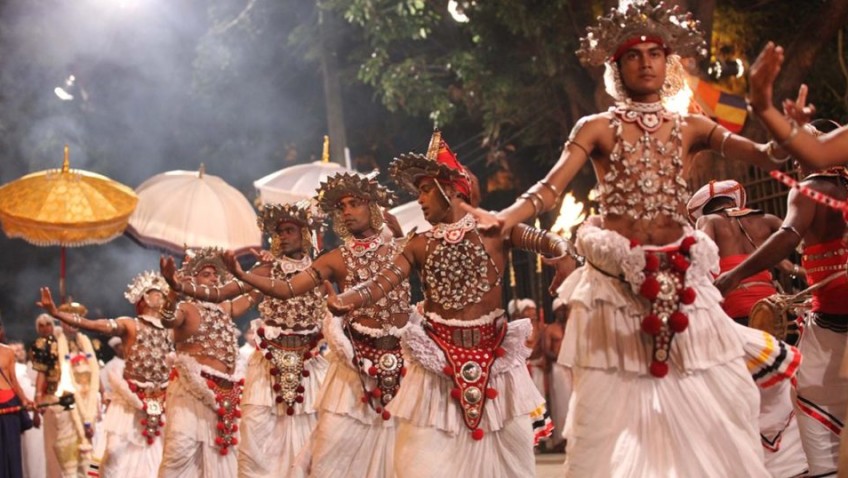 1. Majestic origins and timeless rituals: With an origin rooted in centuries passed, The Esala Perahera in Kandy is one of the oldest and most significant of all Buddhist festivals in Sri Lanka. The Sinhalese term ‘Perahera’ refers to a procession of ceremonial musicians, drummers, dancers, singers, acrobats, whip crackers, flag bearers, sword carriers, fireball dancers and various other performers accompanied by a large number of elaborately adorned elephants parading the streets in celebration of a religious event. Primarily hosted to honour the sacred Tooth Relic of Lord Buddha, the Esela Perahera is also conducted with the intention of beseeching blessings from the divinities for bountiful rains and a prosperous harvest, as well as an intercession to shower blessings on the people.

2. The illustrious ten-day festival: commences with the ‘Kap Situveema’ – a ritual where young jackfruit trees are planted in the premises of each of the four ‘Devales’ (Shrines of God) dedicated to the four ‘Guardian Gods’ Natha, Vishnu, Katharagama and Pattini, and ends with the traditional ‘Diya Kepeema’ – a water cutting ceremony which is held at the Mahaweli River at Getambe in Kandy. 3. A flamboyant fusion of history, culture and religion: Exploring every facet of Sri Lankan culture and Buddhist heritage, the Esala Perahera features an endless variety of traditional local dances, including graceful Kandyan dances, striking whip and fire dances and many other folklore inspired performances. During each perahera, a myriad of festively dressed Kandyan drummers, eastern percussionists, singers and acrobats along with mahouts chaperoning dazzlingly embellished tuskers and elephants take to the streets to illuminate and enliven the procession. The entire route of the procession is decorated with countless lights which are beautifully synchronized with the proceedings and performances of each Perahera. 4. An idyllic base in the heart of the bustling festivities: Located 116km away from Colombo, in Sri Lanka’s scenic Hill Country, Cinnamon Citadel Kandy is nestled in the heart of the city of Kandy, making it the ideal base for those traveling from far and wide to view the Perahera. Set against the picturesque backdrop of the Knuckles Mountain Range shrouded in varying degrees of mist, and built to resemble the majestic realm of the last Sinhalese kings, Cinnamon Citadel Kandy takes you on an enchanting cultural journey and tells you an ancient tale of its own. The resort bears many vivid features in the form of vibrant tones of red and traditional Kandyan art, which evoke a rich cultural presence and a true sense of regal luxury. Cinnamon Citadel’s ample verdant gardens which are located near a tranquil bend in the Mahaweli River offer a quaint and tranquil atmosphere for guests to relax and unwind after a long and exuberant day of crowding alongside the streets to witness the magnificent Esala Perahera.

5. This year, the Kandy Esala Perahera is scheduled to take place from 16th to 26th August in its usual series of colourful Kumbal Peraheras, Randoli Peraheras and vivacious ritualistic ceremonies – all of which will culminate in yet another iconic celebration of Sri Lanka’s authentic historical and cultural heritage.

Plan your stay in Kandy with Cinnamon Citadel via http://www.cinnamonhotels.com/en/cinnamoncitadelkandy